Multistep Separation
Only two or three buffer solutions have to be combined to form the best optimized buffer profile at any part of the separation program. No more compromises by the limitation to four or five buffer changes.

Cooled Reagent Storage
All buffer solutions, as well as the Ninhydrine reagent are stored under inert gas pressure in a refrigerated cabinet to avoid oxidation and air contamination independent of the  ambient environment.

Integrated Autosampler
with a capacity of 120 vials in a cooled sample tray.
Volumes from 1µl to 100 µl can be injected without any loss of sample. The injected volume is adjusted by a high precision syringe, driven by a stepper motor with a resolution
of 17 steps per µl. A programmable wash program will flush the entire injection system to avoid cross contamination of the sample.

Integrated Vacuum Degasser
avoids the interruption of the buffer pump by air bubbles without the need of bubble traps with varying volumes, causing changes in retention times of the different amino acids.

Separation Column Oven
integrated solid state column oven with fast heating and cooling capability with a temperature range from +20°C to +99°C independent of the ambient temperature. Up
to twelve programmable temperature steps can be used during one separation program.

High-Temperature Reactor
with a programmable temperature range from ambient to 180°C with a coiled capillary for the color reaction of the amino acid-ninhydrine complex. Automatic flushing of the reactor coil with a washing solution after each run prevents the blockage of the capillary.

Integrated Reagent Dosing Pump
for Ninhydrine delivery and flushing of the reaction coil after each run. Programmable flow rate from 0.01 to 2.0 ml/min.

Complete Inert Design
All materials coming into contact with the buffer solutions and reagents are made of inert materials as PEEK, PTFE, PVDF etc. Therefore, there is no need for using special non-corrosive buffer compositions or reagents. Fig.1. The S433 Device Monitor screen shows the actual status of the key parameters during a run. 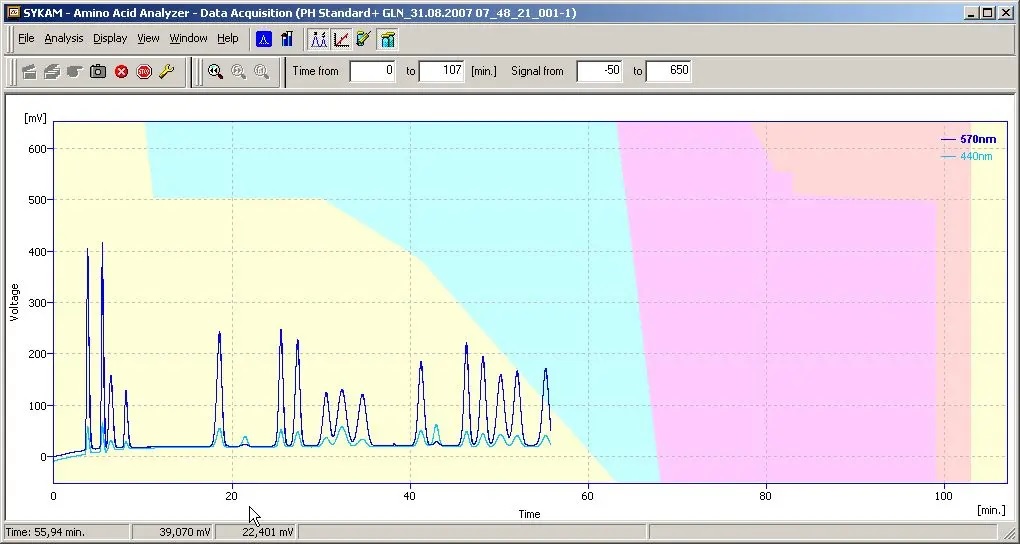 Fig.2. The data acquisition screen with the actual gradient visualized with a different color for each buffer as background of the running chromatogram. Fig. 3. All method parameters are stored within the chromatogram datafile. Buffer gradient, column temperature gradient, integration and calculation parameters as well as the actual buffer- and reagent pressure and actual column temperature are recorded during the run. The buffer gradient program is shown here as one of the tabs of the method screen. Fig. 6. Example of a result screen.

An application for an amino acid analyzer is defined by a separation column, a set of buffers and the list of amino acids to be separated from each other as well as from any disturbing substances present in the samples that could or are likely to appear in the chromatogram. Standard applications are available for complete analysis of hydrolysates, oxidized feedstuff hydrolysates and physiological fluids along with a number of short programs when only some amino acids need to be determined.

Illustrated in the next three graphs:

Apart from the chromatograms shown here below, these points are valid for hydrolysate as well as physiological fluid analysis! Fig.2. Same chromatogram as fig.1. illustrating resolution and absence of any buffer-steps interfering with peak integration. Even at very low concentrations no interference complicating peak integration. Fig.3. Same chromatogram as fig.1. illustrating stable baseline without any buffer-steps or baseline drop after phenylalinine for the 440nm channel.

The above graphs are 700×400 dots. Zooming-in could reveal more detail on your monitor.