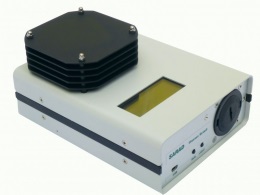 Based on a diffusion type measurement chamber, the instrument allows the simultaneous measurement of activity concentration of Radon (Rn222) and Thoron (Rn220) .

The required fast exchange rate of sampled air is realized by a highly permeable chamber placed outside of the instruments enclosure. The relative Thoron sensitivity reached with this setup is comparable with those of pump based instruments.

The modified measurement chamber has been derived from the Radon-Scout while the electronics comes from the RTM1688-2. That means, more than 2000 data records including a complete alpha spectrum can be stored. Of course, sensors for barometric pressure, temperature and humidity are integrated as well.

The Thoron Scout offers a larger display compared with the Radon Scout. The replaceable batteries allow an autonomous operation of approximately one month. It is possible to operate the unit by mains power resulting in unlimited sampling periods.

A switch output can be used for alert purposes or to control ventilation equipment.

The software solutions Radon Vision (from version 6.2.0) and dVISION/dCONFIG (from version 3.3.1) contain a complete solution for TCP/IP based communication with the most of SARAD instruments. The Implementation is very easy and does not require special skills in the IT field.

The IP-Box, in fact, is a robust, tiny (15mm x 111mm x 51mm), pre-configured computer with SSD and Windows operational system. The program Instrument Server is already installed in the auto-start folder of Windows (see also application note AN-008: Internet based monitoring networks for SARAD instruments). It will be opened automatically after turning on the power. The IP-Box is equipped with several USB and serial ports to connect the instruments. The connection to the internet can be realized either by LAN cable or WiFi. The WiFi adapter is integrated in the IP-Box.

As an accessory, we offer a wireless power switch which can be used for direct ventilation control. The switch includes a transmitter unit to be connected to the alert switch output of the instrument, and a plug adaptor (receiver) which can be placed between the wall outlet and the power cable of the ventilation unit. Optionally, a flush-mounting power switch is also available. The plug adaptor offers an additional timer function to define the duration of the ventilation period independently on the sampling interval of the instrument (for example 15 minutes on while the sampling interval is 60 minutes). The wireless switch is coded – that means, several transmission lines can be established within one building. The assignment between transmitter and receiver is easily done by a push button. 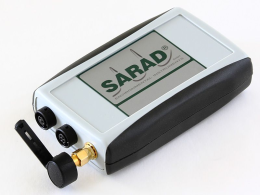 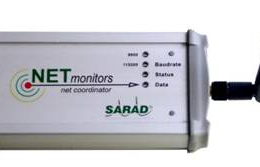 With Net Monitors it is possible to implement a wireless local network for SARAD instruments, or simple to read out the data without a cable connection. The range of the radio link is several hundred meters in case of a free line of sight. For stationary linking, the range can be extended by directional antennas. A PC adapter, called “coordinator” and at least one instrument adapter (endpoint) are required to create the network. The coordinator is connected to the PC by a USB cable. The instrument adapter can be connected to the serial interface (RS232) of the instruments. The link cable is included in the delivery. To power the instrument adapter, either the internal replaceable batteries or an AC/DC wall adapter can be used. The batteries enable an autonomous operation of several weeks. Many instruments are already equipped with an internal instrument adapter.

As soon as an instrument enters the link range of a coordinator, it will be automatically linked into the network. All SARAD software products contain already the network functionality. The communication takes place in the same way like through a cable connection. The only difference is that before any action which requires the communication with the instrument, a selection table with all linked instrument appears on the screen.