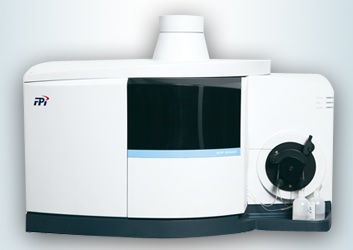 Inductively Coupled Plasma Optical Emission Spectroscopy (ICP-OES), is a well- established analytical technique that used to detect the presence of trace metals in an analyte. The analyte sample is introduced into the ICP as an aerosol that is carried into the center of the plasma – ionized argon gas. The superheated argon gas excites ions and atoms of the element in the sample that emits detectable amounts of light at characteristic wavelengths. The intensity of the emission is propor tional to the concentration of the element detected.

The ICP-5000 can be programmed for both radial and axial view. The less sensitive radial view was preferred for the higher concentration elements such as aluminum, calcium, iron, magnesium, potassium and sodium in environmental samples while the more sensitive axial view was preferred for the lower concentration elements such as the transition series. The most effective systems of ICP-5000 allow the plasma to work in dual view in a single analysis, providing the highest upper linear ranges and the best detection limits.

Previously, trace metals were typically analyzed using atomic absorption spectrometer (AAS) and graphite furnace atomic absorption spectrometer (GFAAS). However, ICP can analyze multiple elements at one time and has longer linear ranges compared to AAS and GFAAS. The linearity for ICP ranges from 4 to 6 orders of magnitude whereas AAS and GFAAS range from 2 to 3 orders of magnitude. ICP has less chemical interference than AAS or GFAAS due to the high temperature of the plasma and also has less matrix interference due to its mode of sample introduction. Furthermore, ICP has a variety of emission lines to choose from to reduce interference from other elements and to increase sensitivity.

The ICP system comprises of a free-running solid- state RF generator, a load coil, a demountable quartz torch and automatically controlled gas flow. The RF generator is continuously adjustable from 750 to 1350 watts (Dual), maximum up to 1600 watts (Radial). The coupling efficiency is greater than 80% with ≤ 0.1% variation in output power stability and ≤0.01% variation in output frequency stability. The RF generator produces an oscillating electromagnetic field at a frequency of 27.12MHz. This radiation is directed to the load coil through which delivered to the torch. The argon gas flowing through the torch will form a plasma in the RF field. Plasma argon, auxiliary argon and nebulizer argon are regulated in a fully integrated gas flow and automatically controlled by MFC in 0.01ml/min increments.

Polychromator : 2D Echelle Grating, 52.91 lines  per mm and a blaze angle of 63.4 degrees. Thermostatted optics: The entire optical system is encapsulated in a thermostatted enclosure 36℃±0.5℃ and purged with argon or nitrogen gas (UV region). Recalibration: Spectra of Carbon, Nitrogen and argon elements are used for automatic wavelength calibration during ever y ignition of the plasma. Do not require either calibration solution or mercur y/neon lamp that is free from calibration consumables or preheating of the lamp.

The ICP-5000 features a megapixel Cryogenic area-array Charge-coupled Device (CCD) detector with unique back-illuminated technique results in average quantum efficiency greater than 75% in UV region. Three-level Thermo Electric Coolers (TEC) are equipped that can drive the cryogenic temperature down to -45℃, cooling time＜3min. Anti-blooming of the detector is functioned in pixel level